By John
rooting android phone OS is quite different from unlocking the bootloader of the phone.most phones like HTC, SONY EXPERIA, GOOGLE NEXUS etc reuires unlocking of bootloader to enable you flash hacks, mods, apps such as custom recovery and Rom.some people mistake rooting to be bootloader unlock and bootloader unlock to be rooting.the two technical aspect of android is different in the sense that you don't need to unlock your android phone bootloader be it HTC, SONY EXPERIA, GOOGLE NEXUS etc before you can root it.infact you can root any of them without unlocking the bootloader and even flash custom recovery such as twpr, CWM and custom ROMs using most of the apk flasher tool such as Rom manager or goo manager, mobile uncle etc.so in this post i will explain further the difference between rooting an android phone and unlocking bootloader. 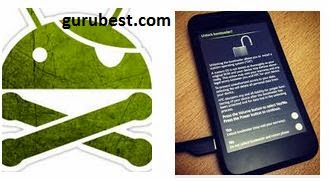 rooting only affects the core system files to enable the user to gain full access on their phone by installing what is called super user or super SU which will allow you authorize apps that will need root access.you can do and undo stuffs on your phone once it is rooted because it opens a path in the core system files that will enable you install any kind of apps that requires root access and lots more but with rooting and bootloader not unlocked, you can not be able to flash stuffs such as custom recovery and ROMs to the phone via computer because it requires a system partition to be unlocked before you can do that, even with S-OFF, you won't be able to do such via pc.

Note that in most android phone, unlocking the bootloader will wipe the phone and factory restore it to it normal state at which it was bought.this means that, every thing will be wiped out such as apps, data, settings in the phone.this will not affect the external or internal Sd card where.but anything in the main phone storage will be wiped out.

don't confuse yourself with S-off.S-off opens more partitions on the phone to enable you flash stuffs from the phone in most latest HTC phones but bootloader unlock opens additional partition that enables you to make use of computer to flash stuffs to the phone which only S-off could not do.Note that most china phone using MTK firmware such as Tecno, gionee etc don't requires bootloader unlock because they don't have hboot versions.

in my future post i will explain more on the difference between S-off, rooting, bootloader unlock and their relationship, so subscribe using your email to enable you get my latest post via email

1 Responses to "Difference between Android Phone Rooting And Bootloader unlocking"