» android phone tricks » What No One Has Told You About The Internal Memory On Your Android Phone : A Must Read For All Android Phone Users

By John
What No One Has Told You About The Internal Memory On Your Android Phone : A Must Read For All Android Phone Users. Guess you may be wondering why you normally get insufficient space when ever you tried to install apps and games from either google play store or downloaded from third party sites even when the android phone or tab has 16gb, 32gb internal memory space.lots of us are confused because we thought that the internal memory space is large enough to consume lots of apps and games but that is just imagination because in actual sense the internal memory space is shared into 3 parts which are space for installation, storage for stuffs like music, video, files, images, pictures etc and Operating System (OS ) files but we would have to skip that of the OS files because majorly OS files has to share part of the memory space, so we are just going to focus on 2 shared parts of internal memory space which are space for installation and storage for files like music, pictures, documents, videos etc. 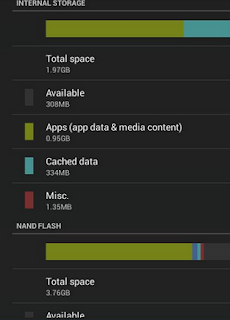 No doubt that Android phone, tablet, devices is one of the most used devices and many people that are are making use of it do get confused with the internal memory on their android device.i too was confused when i started using mobile smart phones that are running Android OS due to the fact that i was new to it.have you been in a state where by you bought a new android phone or tab and among the listed features, it is boldly written that the device has 16gb inbuilt ( internal memory space ) and you were thrilled by such space but after installing one or two apps and games, you started experiencing insufficient memory space when ever you tried to download new apps from play store or other third party site.

You quickly check your storage details by going to settings and you noticed you have over 8gb free space but still experience insufficient space.the reason for this is what i am going to explain to you so that you will stop the panic whenever you experience insufficient space on your android phone be it HTC, Samsung Galaxy, Tecno, Sony Xperia, Gionee, Infinix etc and find a solution to resolve it.the simple reason why you normally feel that you have enough free space in your internal memory is because the free space you thought was free is not actually free for installation of apps, games, themes etc.when ever you heard that an android phone or tab has 16gb internal memory, this means the internal space allocated to the device is 16gb but it is shared into two major parts aside space for the OS files, one part is allocated for installations of apps, games, themes, etc.

the storage which serve as your memory card ( sd card ) where you store files such as images, pictures, movies, documents etc normally consume more of the space.this part is usually large because you make use of it to store large files.

When ever you take a picture, record video, Bluetooth transfer, download stuffs from the internet aside google play store, it all goes to the path that serve as internal sd card of your phone storage.it will be in that sd card.this serve as the phone internal storage space, not the memory card you insert.but the both of them does the same function but one is inbuilt while the other you normally insert to the device is external sd card.

Any apps you install on the device, goes to the space given to installation and when that space is filled up due to the number of apps you have installed, you will experience insufficient space even if your total internal memory has enough free space.the free space available for installation is consumed by apps you have installed while the storage space meant for storing files may still have enough space but you can't use that for installing apps except you tweak the device and this process is for advance users because if you try to tweak it without due diligent, you may end up damaging the device beyond repairs.

Doing this has its own risk and it could lead to damaging the device beyond repairs if you are not tech savvy like me.so please do not try it if you can't do it.i believe you now understand why you do get insufficient space even when you think you have enough space on your device.to free up some space on your device, you may have to make use of android apps specially made to clean the device and remove junk files.one of the apps i will recommend is Sd Maid.you need to root the device for it to work perfectly.hope it helps, cheers.
visit www.gurubest.com to view the latest post update you are not seeing right now.
more articles update is posted on gurubest every day,so don't be the last to get update to your email.Subscribe by email

No Responses to "What No One Has Told You About The Internal Memory On Your Android Phone : A Must Read For All Android Phone Users"