By John
difference between PowerVr, Adreno, Mali, Tegra . guess you must have come across this terms when downloading high graphics android apps or games but don't know exactly what it means.if you are a heavy game downloader and player, then you should have come across this terms because most games have different versions depending on your device graphic accelerator.the term PowerVr, Adreno, Mali, Tegra refers to your GPU graphic accelerator in your android phone or device which enables games with high graphic to accelerate properly with your device.it makes it run smoothly depending on the version you downloaded for your device.some games and apps do have such crossed version which means you can download it and try on your device.if your device GPU is tegra and you downloaded a game with tegra version, it will run smoothly depending on the tegra version it has but if you try the same game on an android phone or device running adreno, it may be slow. 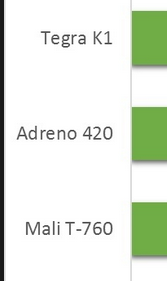 These are the type of Graphic accelerators in your Android device.

Mali : This is an Android Gralloc module which allocates memory from the Unified Memory Profider (UMP) device driver. The Gralloc module is used by Android’s composition engine in order to allocate and manage memory which is suitable for 2D and 3D graphics usage. The Mali GPU driver stack is able to use UMP memory directly, resulting in zero-copy operations when composting.

PowerVR : is a division of Imagination Technologies (formerly VideoLogic) that develops hardware and software for 2D and 3D rendering, and for video encoding, decoding, associated image processing and DirectX, OpenGL ES, OpenVG, and OpenCL acceleration.

for you to know the GPU your device is using, download either of this app called

CPU Z and CPU Identifier.ones you open it, you will see the details of the device, just scroll to where you will see GPU or CPU.there you will see the GPU your phone is using.hope this helps.cheers.
visit www.gurubest.com to view the latest post update you are not seeing right now.
more articles update is posted on gurubest every day,so don't be the last to get update to your email.Subscribe by email

No Responses to "Difference Between PowerVr, Adreno, Mali, Tegra"