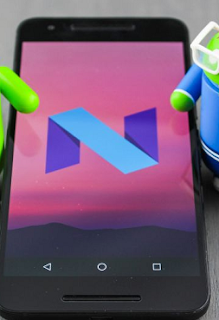 So people started calling it nutella due to the fact that a large percentage of fans suggested Nutella to be the new android 7.0 version name.with this rumor spreading like wide fire, google has decided to give the Android 7 a name and it is called Android 7 Nougat.

You may Like To Read Difference Between PowerVr, Adreno, Mali, Tegra

for those who don't know what nougat means, is a chewy sugar or honey-based whipped egg-white sweet that often contains nuts. It is the main body of a Snickers bar, previously known as a Marathon.

Opinion on whether Nougat is tasty is a thing to watch out for. Either way, new Android 7 Nougat should start making its way on various devices from September according to the info gotten, and some of the expected features upgraded includes battery-saving Doze features, more advanced split-screen multitasking and improved notifications.

Although, if Marshmallow’s adoption rate is a predictor, having only just passed 10% of Android devices out there after nine months on the market, it could take over a year to become common, even for new smartphones and tablets. — Android (@Android) June 30, 2016 That moment when... #AndroidNougat 🤗 #AndroidNReveal.

According to twitter tweets updates by so many android fans

It has been officialy stated on July 1, 2016 , that Android N is called Android Nougat? But i wanted android Nutella 😞 — Fannyfanfan (@IrfanVanHaris)

July 1, 2016 , the new software update for Android its gonna be called as Nougat not Nutella sighh 😪😪 — Shawarma

So for all android users who have been expecting and waiting for android 7.0 release date and the Android 7 name, it is now officially made public that the new android 7 Name is called Android Nougat.
visit www.gurubest.com to view the latest post update you are not seeing right now.
more articles update is posted on gurubest every day,so don't be the last to get update to your email.Subscribe by email