By John
List Of Mobile Network In Nigeria That Plans To Stop Blackberry Subscription. Back then blackberry phone is one of the most sort after gadgets which serves as symbols for the rich and famous people around the world but after few years of patronage of blackberry phone. It seems they are no longer being recognize as a smart phone any more because most mobile telecommunication companies such as Etisalat, Glo Have stopped their blackberry subscription service especially blackberry phone that is running OS7 which is not android compatible. 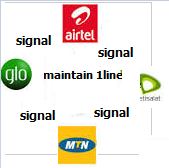 You May like Read Airtel Freebasics : Airtel Free Internet Browsing via http://0.Freebasics.com

It may interest you to know that In mid 2016 , blackberry company announced that it would no longer be manufacturing phones. “The company plans to end all internal hardware development and will outsource that function to our partners,” said John Chen, chief executive and executive chairman of Blackberry. “We are focusing on software development, including security and applications.”

Guess this shows a sign that blackberry phone is not being admired by the rich and famous in the worlds, even including mobile telecommunication companies such as MTN, Etisalat, Glo etc that has made noticed in discontinuing blackberry data plans and other services.

Etisalat leading the way. In December 2016 , it messaged subscribers as follows:

“Dear Customer, our BB service will no longer be available. You will continue to enjoy your current subscription till it expires. Thank you for choosing Etisalat.”

Dear Customer, starting December 17, 2016 BlackBerry services on your device (BBOS7 devices) will no longer be available. You can still continue to use the device to Call and Text. We re urge you to migrate to a BB10, Android, Windows or IOS handset to use your remaining data.”

“Dear customer, MTN Blackberry service will be decommissioned on 27/01/2017 . Please upgrade to a smartphone and enjoy 100 per cent bonus on any data bundle purchased.”

guess this is the end of blackberry 0S7 phones because most people using that phone will be handicapped with socializing and enjoying of internet facilities since one of the top most used social network app, whatsapp will end their support for such device. Hope blackberry users will upgrade to a smart phone such android to continue enjoying the world of smart phone experience.
visit www.gurubest.com to view the latest post update you are not seeing right now.
more articles update is posted on gurubest every day,so don't be the last to get update to your email.Subscribe by email