DNS Server isn't Responding - How To Fix It 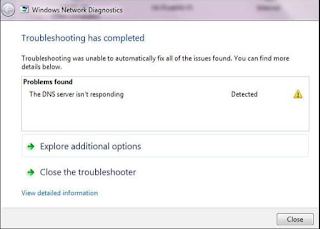 so here is exactly what i did to resolve dns server isn't responding when trying to surf the internet after successful connection.
You May Like To Read How To Resume Expired Download On IDM

How To Fix DNS Server isn't Responding, Windows 7
==>
Open command prompt with Admin privilege.do this by rightclicking on command prompt and chose to open with admin right

then Restart computer and check if the problem is has been fixed by trying to connect to the internet and surf.
i believe this should fix the issue as this is exactly what i did to fix DNS Server isn't Responding

No Responses to "DNS Server isn't Responding - How To Fix It"